Almost all people hate fat bulges. Our thighs jiggle, the clothes look bad, and lingers on and on despite us trying to eliminate it. The excess of fat increases the risk of some illnesses like heart disease and type 2 diabetes, so that’s why everyone seeks for ways to reduce it.

There are two types of fat in humans: white fat and brown fat, and if you want to learn how to lose it is important to know the difference between the two. “White fat” is very common and we can see it on the human belly, arms, thighs and even the back, and it serves as a thermal insulator and maintains the body temperature.

“Brown fat” is less abundant, and it serves the purpose of creating heat, unlike white fat which traps it. This heat is produced by burning calories, or burning energy. Sometimes white fat can take on the features of the brown one, and the result of this is the “beige fat”, and the process is called “browning”. Beige and brown fat help in burning calories so they are good if you want to lose weight, while white fat causes obesity. A researcher from the University Of Kentucky School Of Medicine, Dr. Philip A. Kern, says that browning fat tissue is very good for fighting obesity, because it makes the body burn more calories than usually.

Where do we have brown fat?

Rarely can one find brown fat in adults, and if it is found, it is in some unpredictable areas of the body, depending from person to person. You can typically find it in some regions in the neck and the shoulders, but that’s not always the case. In some healthy men who took part in a study, the brown fat was found in the chest or down the spine and in some places in the abdomen. 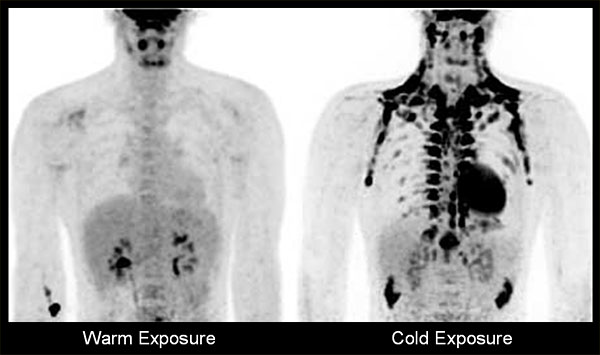 12 young men in Japan, who had lower than average amount of brown fat, were asked by researchers to sit in a 63 degrees F room for 2 hours daily for a month and a half. In the beginning, these men burned about 108 extra calories on average in the cold then they did in normal temperatures. After this month and a half, they were burning, in average, 289 extra calories and it was seen that their beige fat had increased. Another group of men at similar age and health condition, which was not exposed to the cold, did not show any change in their metabolism.

Dr. Helen Budge and Professor Michael Symonds from the University’s School of Clinical Sciences say that their research has shown that in the neck area there is only around 50g of brown fat which switches on and off during the day, depending on the temperature we’re exposed to or on the activity we do, if we eat or exercise. This research is published in the Journal of Pediatrics. What’s of our interest is to know how we can switch this fat if we want to lose some weight and stop whenever we want to.

According to research, some people have more brown fat than others:

Whenever we expose ourselves to cold, our brown fat turns on, and this is very helpful if we want to reduce our weight. According to researchers in the study in Endocrine Society’s Journal of Clinical Endocrinology & Metabolism, in the winter, we should turn down the thermostats for a short period every day.

By taking biopsies of patient’s fat, scientists have discovered that in winter, belly and thigh fat shows more signs of browning than in summer. Thus, cold temperatures help in the process of transformation of white fat into beige. Most of us in winter heat our homes to around 69F (21C), but if we heated our homes to temperatures between 62F (17C) and 59F (15C) just for a couple of hours daily, we will make our bodies burn more calories than usual to keep warm. This is the disadvantage of spending time indoors in overheated rooms.

In a study, a group of men slept in a metabolic chamber on a temperature of 66F. after a month, the volume of their brown fat had almost doubled, they burned more calories and had greater insulin sensitivity.

The practice is called “cold thermogenesis” and has the aforementioned results. There are:

Tim Ferriss has written a book, The Four-Hour Body, in which the concept of activating the brown fat by exposing yourself to cold temperatures is explained. He says that you can increase your body’s potential to burn calories up to 300% by practicing ice therapy alongside the healthy diet and the exercising. There is an article that backs up his statement:

“A scientist from NASA has confirmed this to the ABC News. He has studied the effects of temperature on astronauts and he saw that one’s metabolism can be boosted by 20% if the environment is not hotter than 60F degrees. A Joslin researcher announced for the National Public Radio that 3 oz. of brown fat can burn 400-500 calories daily.”

There’s a theory called “Popsicle Panniculitis” that says that excessive exposure to popsicles, which are very cold, results in dimples on the cheeks.

A nine-month-old baby boy’s parents said that they started to be more and more concerned because on their boy’s cheeks a reddish discoloration appeared. The baby was born healthy, with no family history of illnesses, safe from bug bites, trauma or the like. They had taken care of all the immunizations and observed the baby’s development which was normal. Still, there were those symmetrical non-tender lesions on his cheeks, close to the mouth.

After the examinations, there was questioning by which was found that before these lesions appeared, the baby has had popsicles for teething, and the diagnose was called popsicle panniculitis. But it could be caused also by icepacks and exposure to cold. Mostly it occurs during infancy after a “cold injury” on the cheeks and the chin. These areas have subcutaneous fat and are also exposed to cold, and can take on reddish discoloration or red-purple, hardened, non-tender swelling of the cheeks even 24-48 hours after the exposure to popsicle or an ice cube. In adults, this subcutaneous fat has mostly unsaturated fats, so that it’s clear why it occurs mostly in children.

Dr. Amy Brodsky, a Chicago board dermatologist, had injured her left cheek at the age of six and her cheek was treated with ice for several hours. After a month or two, there was a pronounced dimple on her cheek. Everyone thought it was a result of the injury, until she learnt that this is a case of Cold Panniculitis.

As we have read, applying ice packs on areas with white fat for 30minutes to an hour can boost the process of browning and help you regulate your weight, combined with a healthy diet and regular exercise

First, you chill the skin. Then you cause the fat cells underneath to die off and be metabolized by the body. This makes the fat in this area thinner. There is a famous treatment you can see on the commercials, CoolSculpting, which works in the same way but it is quite expensive.

For a visible result, one might wait 6-12 weeks, but one loses half an inch at the end of every one-hour treatment. Even though you can treat one area multiple times, best effect you will see is after the first treatment. 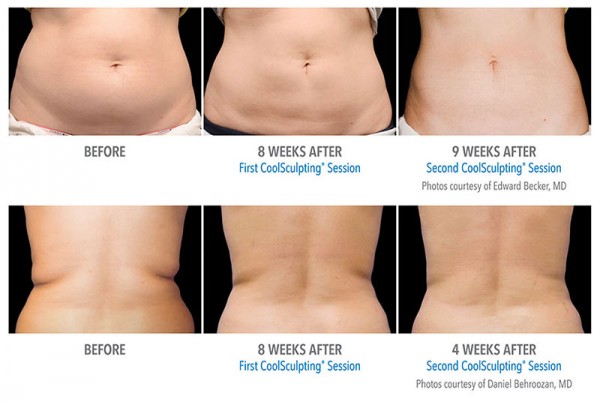 This device sucks the skin and the fat in a cup and cools them. But this can cause inflammation of the fat cells (Panniculitis), and then natural cell death (apoptosis), so you will have an inflammation that will last for about 3-30 days, but the fat cells will continue dying in the next 90 days. You will face bruising and redness, and you will have to continue with a healthy diet, because not all fat cells will dye off.

No frostbite can occur, because it can appear on much colder temperatures (-10C/14F) than those at which this device works. CoolSculpting triggers the natural process of cell death, so for the full effect you will have to wait for 3 months. You can do a treatment similar to this one at home and almost for free.

Ice packs have been used for decades when it comes to sports injuries and to bring down inflammation. Thus, you can also use them at home for the purpose of shedding fat.

A study of CoolSculpting proved the reduction of fat to be true, only not at those rates as it is said in the commercials. Applying ice packs on some areas of your body can reduce the level of fat in those particular areas. Practice this for a half an hour or an hour, 3-4 times a week, and you will notice the results.

What to watch out for

If you use the ice packs incorrectly you can cause skin burns, varying from first degree burns to second and third degree burns. The most important thing to avoid is applying the ice directly to the skin without using some sort of barrier in between.

You can use a t-shirt as a protecting barrier. You can also try with a barrier of paper or a towel which you’ll use for a couple of minutes until your skin adjusts to the temperature. Avoid using thick towels or materials.

Factors that increase the possibility of skin burns:

If you notice blisters, if you feel burning, numbness, itchiness or pain, you have some symptoms of cold induced injury. Your skin might become yellowish-gray. You will have to re-warm the area affected.

http://www.non-stophealthy.com/kill-fat-cells-instantly-just-by-freezing-them-youll-never-believe-how-it-works/http://www.non-stophealthy.com/wp-content/uploads/2015/09/Kill-Fat-Cells-Instantly-Just-By-Freezing-Them-You’ll-Never-Believe-How-It-Works-e1454551838955.jpghttp://www.non-stophealthy.com/wp-content/uploads/2015/09/Kill-Fat-Cells-Instantly-Just-By-Freezing-Them-You’ll-Never-Believe-How-It-Works-150x150.jpg2015-09-05T04:33:47+00:00Non-Stop HealthyBeautyDiet & Weight LossHealthNatural RemediesRecipesfat cells
Almost all people hate fat bulges. Our thighs jiggle, the clothes look bad, and lingers on and on despite us trying to eliminate it. The excess of fat increases the risk of some illnesses like heart disease and type 2 diabetes, so that’s why everyone seeks for ways to...
Dragana Andreevskanonstophealthy@gmail.comAdministratorNon-Stop Healthy
Share
tags: fat cells