Magnesium: An Invisible Deficiency That Could Be Harming Your Health

Magnesium is very important mineral for every organ in our body, particularly our heart, muscles and kidneys. If you face fatigue or weakness, abnormal heart rhythms, or muscle spasms and eye writhing, low amounts of magnesium could be the cause.

The blood test is not relevant way to check your magnesium levels. Only 1% of the magnesium in our body is transported with our blood, which means that the blood test cannot show if you suffer from magnesium deficiency or not.

Most of the magnesium is accumulated in our bones and organs, where it takes part in many biological functions. Still, it will not be strange that you are deficient in magnesium and not aware of it, which is the reason why this deficiency is also known as “invisible deficiency.”

Some statistics are saying that 80% of the Americans are not consuming enough magnesium and it is very possible that they are deficient. Other study proves that only around 25% of US adults are consuming the advised daily amounts of 310-320 mg for women and 400-420mg for men. 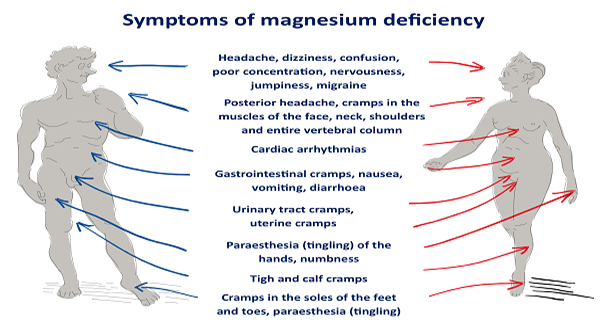 Which is more worrying is that, even by taking this amount is “just enough to ward off outright deficiency,” says Dr. Carolyn Dean, a medical and naturopathic doctor.

Magnesium is considered as primarily a mineral for our heart and bones, but this is wrong. Scientists now know about 3,751 magnesium-binding sites on human proteins, pointing that its role in our health and ailment is greatly underestimated.

Magnesium is included in more than 300 various enzymes in our organism and has a crucial role in the body’s detoxification processes, making it very important to prevent any harm from external chemicals, heavy metals and other toxins. Moreover, magnesium is needed for:

Dr. Dean has researched and written about magnesium for 20 years. The latest addition of her book, The Magnesium Miracle, was released in 2014 and it explains about 22 medical areas that lack of magnesium causes or stimulates, and they have all been scientifically proved. Here is the list:

Loss of appetite, headache, nausea, fatigue and weakness are the early symptoms of magnesium deficiency. An ongoing lack of magnesium can result with more severe symptoms like:

The Role of Magnesium in Diabetes, Cancer and More

Many people do not even think about magnesium when like to prevent chronic ailments, but in fact, it plays a crucial role. There are few studies about magnesium’s role in maintaining the metabolism’s proper function-particularly in conditions of insulin sensitivity, glucose regulation and protection from type 2 diabetes.

Increased magnesium consummation lowers the chances of impaired glucose and insulin metabolism and decelerates development from pre-diabetes to diabetes in middle-aged people. Scientists noted,” Magnesium consummation could be especially useful in offsetting your risk of developing diabetes, if you are high risk.”

Many studies have proved that increased magnesium consummation is related with increased bone mineral density in men and women, and research from Norway has even discovered an relation between magnesium in drinking water and a reduced risk of thigh fractures.

Magnesium can reduce the chances of cancer, and according a study released in the American Journal of Clinical Nutrition proved that increased consummation of dietary magnesium is related with reduced chances for appearance of colorectal tumors.

Results from the meta-analysis showed that for every 100mg raise in magnesium consumption, the risk of colorectal tumor was lowered by 13%, while the chances for appearance of colorectal cancer were reduced by 12%. The experts claim that the anti-cancer effects of magnesium are linked to its ability to lower insulin resistance, which may affect the tumors occurrence.

Seaweed and green leafy vegetables such as Swiss chard and spinach are rich sources of magnesium. Also magnesium is found in beans, nuts and seeds, like sunflower, pumpkin and sesame seeds. Avocados are also rich source of magnesium. Juicing is one of the best ways to get all the nutrients from the fruits.

Anyway, most of the fruits and vegetables grown today are lack in magnesium and other important minerals, so by only eating magnesium-rich foods will not be enough to get the required amount of magnesium. Dr Dean notes:

“Magnesium is farmed out of the ground much more than calcium…One century ago we would get 500 mg of magnesium in an ordinary diet. Today, we wouldn’t get 200mg.”

The herbicides such as glyphosate act like chelators, obstructing the intake and exploitation of minerals in many grown foods today. This is why it is hard to find magnesium-rich foods today. You also deplete the magnesium while cooking and processing the food.

Particular foods can affect your organism’s ability to absorb magnesium. If you drink alcohol often, it may disrupt your body’s ability to absorb vitamin D, which on the other hand is needed for magnesium absorption. If you consume high amounts of sugar, it can lead to magnesium ejection from the body through the kidneys, which will eventually “result in a net loss,” explains Dr. Danine Fruge, associate medical director at the Pritkin Longevity Center in Florida. These factors are also related with reduced magnesium levels:

Calcium, Vitamin K2 and Vitamin D Must Be Balanced with Magnesium

You may think that you can solve the risks of magnesium deficiency by consuming supplements, but this is not simple at all. When you are consuming magnesium, you should also take calcium, vitamin D3 and vitamin K2, because they all work together. Consuming high amounts of calcium without balancing with magnesium can result with heart attack or even death. A research for Paleolithic or caveman diet has proved that the ratio of calcium to magnesium is even. Average American diet has higher calcium to magnesium ratio, averaging about 3.5 to 1.

If you consume too much calcium and lower amounts of magnesium, your muscles will go into spasm, and this will affect your heart. According to Dr. Dean-“The muscle and nerve function that magnesium is charged for is reduced. When you are lacking of magnesium your muscles go into spasm. Calcium stimulates the muscles to contract. If you maintain balance the muscles will work properly. They will relax, contract, and do their job.”

While balancing calcium and magnesium you should also know that vitamins K2 and D must be consumed too. These four ingredients are working as a team, and they support each other. Imbalance between these ingredients is the main reason why the calcium supplements are considered as contributors of heart attacks and strokes, and why some individuals suffer vitamin D toxicity. The vitamin K2 holds calcium in its adequate place, which is one part of the explanation of these side effects. In case you are lacking of K2, the additional calcium can lead to more issues than it actually solves, by storing in the inadequate places, such as your soft tissue.

Also, if you intend to take vitamin D orally, you will need to take it through your food or from supplemental vitamin K2 and additional magnesium. Consuming higher doses of vitamin D supplements without required of K2 and magnesium could result to vitamin D toxicity and lack of magnesium symptoms, which include inadequate calcification that may be harmful for your heart.

Tips for Increasing your Magnesium Levels

One way to raise your magnesium levels is by making juice from your greens. You should drink one pint to one quart of fresh green vegetable juice daily, and it should be your primary source of magnesium. You try to find organic foods grown in nutrient-rich ground but it will be pretty much difficult. If you choose to take a supplement, be careful because there are many different types of magnesium supplements on the market shelves. You will never find 100% magnesium supplement.

The ingredient used in any given compound can impact the absorption and bioavailability of the magnesium, and might give a little bit different or targeted health benefis. In the following table you will read the differences between different forms. You should search for magnesium threonate and citrate because they are the best sources, because they penetrate cell linings, including the mitochondria, which leads to increased energy levels. Moreover, it gets inside your blood-brain barrier and does amazing job in treating and disabling dementia and improving memory. If you are consuming supplements, you can make the “bowel test” which will tell you if you consume too much magnesium.

Dr. Dean says: “The “bowel test” is the most relevant test which can tell you if you consume too much magnesium. When your stool becomes loose, you have higher magnesium levels. This can be very helpful for people who suffer from constipation…which is one of the symptoms of magnesium deficiency.”

Making Epsom salt baths is another way to take magnesium. Epsom salt is actually a magnesium sulfate that can be absorbed in our body through the skin. For topical absorption and application you can also use magnesium oil. Make sure you avoid any supplement that includes magnesium stearate, which is a harmful additive.

http://www.non-stophealthy.com/major-signs-you-are-magnesium-deficient-and-what-to-do-about-it/http://www.non-stophealthy.com/wp-content/uploads/2015/08/Major-Signs-You-Are-Magnesium-Deficient-and-what-to-do-about-it.pnghttp://www.non-stophealthy.com/wp-content/uploads/2015/08/Major-Signs-You-Are-Magnesium-Deficient-and-what-to-do-about-it-150x150.png2015-08-15T04:42:57+00:00Non-Stop HealthyHealthNatural RemediesRecipes
Magnesium: An Invisible Deficiency That Could Be Harming Your Health Magnesium is very important mineral for every organ in our body, particularly our heart, muscles and kidneys. If you face fatigue or weakness, abnormal heart rhythms, or muscle spasms and eye writhing, low amounts of magnesium could be the cause. The...
Dragana Andreevskanonstophealthy@gmail.comAdministratorNon-Stop Healthy
Share

« Have You Heard About the Lemon Water Challenge? If You Drink a Glass of Lemon Water for 28 Days Your Body Will Experience Phenomenal Changes
The Perfect Exercise For Poor Body Posture »