China is considered to be the first country where tea was used as a beverage. This was first recorded in the third century. Then, about 1400 years afterwards, the tea became part of the British culture, and later, it also became a part of the North American culture as well. Nowadays, almost all the households in the USA (above 80 percent) drink tea at least once a week. 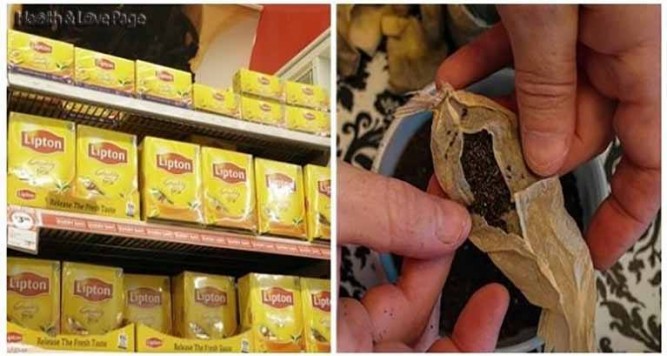 With each year, the popularity of tea increases, and numerous companies use the health benefits of this beverage as a main part in their marketing materials.

Tea consumption provides numerous benefits which continued the surge in tea sales regardless if the tea is brown, red, or green. Nevertheless, the Canadian news service CBC has carried out a research and it has been revealed that nine out of ten popular tea brands in North America are loaded with toxic pesticides.

The presence of pesticides in teas undermines their health benefits, as many of them are well-known carcinogens. Some tea brands also contain a lot more of these chemicals than the “allowed” limits.

The research of the tea market conducted by the CBC in 2004 found out that nine of the ten most popular teas in Canada contain harmful pesticides. The tea brands which are contaminated with these harmful pesticides are the following:

The tea brands we just mentioned were discovered to contain pesticides, but some in comparatively low quantities that should not cause any health issues. However, even though six of them contained pesticides in the ‘allowed’ limits, there were three that contained dangerously high levels of pesticides.

The Three Most Poisonous Teas

This type of tea was found to contain ten different toxic chemical compounds, which makes it the third highest pesticide tea on this list. The pesticide mostly contained in this tea is called Acetamiprid, a pesticide shown to cause muscle weakness, convulsions, severe nausea, vomiting, and hypothermia.

The abovementioned researched discovered that this tea contains increased levels of both chlorfenapyr and acetamiprid. Chlorfenapyr has been proven to be fatal to people, even if it is taken is small amounts. This chemical gradually works in the system so it may lead to death even after two weeks after the ingestion. The CBC Marketplace report indicated that the final product made by the Tetley’s tea contains eighteen pesticides.

This tea has been proven to be the most toxic tea on the market. The presence of chlorfenapyr and acetamiprid in this tea is ten times bigger than the ‘allowed’ limits. This type of tea is also high in bifenthrin, a dangerous substance proven to increase the risk of cancer.

The good news from the CBC Marketplace report is that there is a type of tea that does not contain any pesticide. This type of tea is Red Rose. It was proven that the orange pekoe tea made by Red Rose is one of the rare types of tea which are both tasty and healthy at the same time and which do not cause any risk to the health of the consumers and do not do harm to the environment.

Red Rose is a company which does not use pesticides and which farms sustainably without causing any damage to the nature. This is also verified by the fact that this company is Rainforest Alliance certified. This company adheres to the Fairtrade legislation and works hard on improving the working conditions of their employees. This confirms that besides being the healthiest tea option, Red Rose is also the most ethical tea option.

What we consume and what we take in our bodies is up to ourselves. This means that we should look more closely even at the brands that claim to be natural and healthy and question the products they offer.

Some popular tea brands such as Trader Joe’s, Yogi, and Tazo claimed to be natural and healthy, but then came under public scrutiny and it turned out that these companies were using pesticides, ‘natural flavors’, and GMO ingredients. This information was quickly spread over the internet, even though there is no available evidence to back these public claims and accusations. Nevertheless, these rumors did make changes, as it is only natural for people to question debatable things, and caused the companies themselves to introduce more changes in the production process.

As a result, in the past two years, Yogi introduced drastic changes just because of the reaction of their customers. One of the changes they introduced was getting rid of the pesticides they previously used. This did not exclude the presence of ‘natural flavors’, an ingredient with debatable quality. However, it is always good for the customers to know that their opinion does matter and that they can make some changes, which can sometimes be slow, but still, beneficial and useful. Other tea brands with great reputation among their customers are Traditional Medicinals and Numi.

If you want to protect both your health and the environment you live in, you should avoid using brands which use pesticides in their production processes. The more people want to be heard, the more the companies will be forced to hear the opinion of the people, and as these companies depend on their customers, they will be also forced to alter their production methods.

https://www.non-stophealthy.com/never-buy-9-pesticide-filled-teas-plus-safe-ones/https://www.non-stophealthy.com/wp-content/uploads/2016/09/You-Should-Never-Buy-These-9-Pesticide-Filled-Teas-plus-the-Safe-Ones-e1473638605486.jpghttps://www.non-stophealthy.com/wp-content/uploads/2016/09/You-Should-Never-Buy-These-9-Pesticide-Filled-Teas-plus-the-Safe-Ones-150x150.jpg2016-09-12T02:07:06+00:00Non-Stop HealthyHealthHealthy DrinksNatural RemediesRecipespesticides,tea
China is considered to be the first country where tea was used as a beverage. This was first recorded in the third century. Then, about 1400 years afterwards, the tea became part of the British culture, and later, it also became a part of the North American culture as...
Dragana Andreevskanonstophealthy@gmail.comAdministratorNon-Stop Healthy
Share
tags: pesticidestea

Here’s Why You Should Drink Ginger Tea Every Day And How To Prepare It In The Right Way!

« Use The Leaves Of This Plant To Help You Against Wrinkles, Acne, Dark Spots And Sun Allergies
This Plant Kills Fourteen Types Of Cancer And Thirteen Different Infections! – So Why Don’t Doctors Recommend It? »