The saying “When the going feels impossible, the impossible is challenged with innovation” is the motto of Dr. Meara and his colleagues.

Dr. Meara and his team came up with an innovative idea to use 3D-printing in the medical world so that they help the little Violet Pietrok. 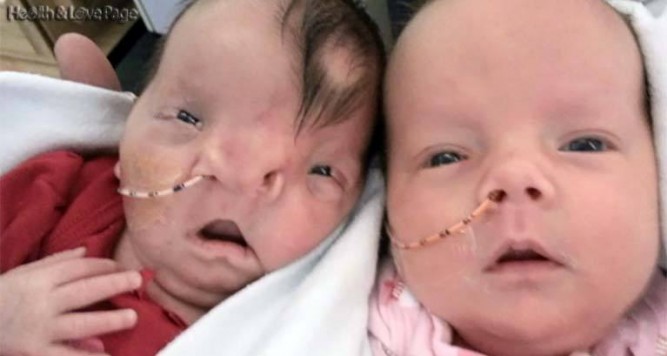 Violet is one of the twins (Cora and Violet) of Alicia Pietrok from Oregon, born on February 12, 2013. Unfortunately, Violet was born with a rare cranial condition called Tessier facial cleft, regardless of the fact that she was born only two minutes apart from her twin sister. When someone is born with this Tessier facial cleft, it means that they are born with improper structure of the skull and the facial tissues. Differently put, the nasal cavity does not have adequate cartilage and the eyes are spread apart.

Violet’s parents, Alicia and Matt, went to Boston’s Children’s Hospital after they had conducted a lot of studying about how to improve the condition of their little daughter. The vice-chair of neurosurgery, John Meara, MD, and the director of SIMPeds, Peter Weinstock, MD were their saviors.

It was not easy for the parents to find out that their daughter’s condition was extremely rare and that it represented an uncharted territory seen as a case study for cranial facial surgery by medical students. The good news was that these doctors they went to have had four similar cases previously in the past couple of years.

Dr. Meara and Dr. Weinstock did some MRI scans and then printed a 3D-model of the skull of the little girl. They used the specification and data obtained by the MRI scans. They laid down some layers of resin in order to restructure Violet’s precise cranial features with acrylic colors to locate exact spots. This simulated hard copy made it easier for the doctors to understand the condition of Violet without the interference of skin and tissue covering the area.

The next thing the doctors did was making different cuts on the model in the lab which helped him foresee the possible obstacles, as well as if bone structures will make contact if they bring Violet’s eyes together. Achieving the perfect technique required a lot of practicing on the models. According to Dr. Meara, this case was different from the previous ones, as 3D-printing made it possible for them to dismantle the skull like never before, as they were able to see regions in the skull as well.

The 3D models they used represented a map or a blueprint which guided them in the process of bringing Violet’s eyes together. It also made it possible for them to press the uneven parts of Violet’s skull back to the adequate position, with a millimeter precision. They practiced and prepared themselves for a long time and finally informed Violet’s parents about the surgery. Normally, they were worried if the surgery was going to compromise the organs and tissues’ function in their daughter’s face, like the optical nerve responsible for the vision for example. However, they were reassured that everything was going to turn OK.

The surgery started with the step of moving Violet’s eyes closer together and closing the forehead gap. The total time of the surgery was 10 long hours. When the ten hours have passed, the doctor approached to the parents with a smile on his face and he informed them that the surgery was successful. Violet stayed in Boston for six weeks to recover. Violet’s parents are still in contact with Dr. Meara, whether it is on the phone or by Skype, and he gives them advice on how to care for their daughter’s surgical wounds and stitches.

The end of the first phase of the surgery was when the skull was healed and when the cranial tissues adjusted to the new structure. The second phase of the surgery was projected for 2016 and in this phase the nasal tissues should be adjusted. By the time Violet starts with school, her face is planned to be completely repaired. This is another case where 3D-printing has been shown to be very beneficial in making the medical procedures more accurate and quicker, as well as in improving the face of surgery in general.

http://www.non-stophealthy.com/girl-tessier-facial-cleft-undergoes-3d-printing-surgery-reconstruct-face/http://www.non-stophealthy.com/wp-content/uploads/2016/09/Girl-with-Tessier-Facial-Cleft-Undergoes-3D-Printing-Surgery-to-Reconstruct-Face-e1473121364364.jpghttp://www.non-stophealthy.com/wp-content/uploads/2016/09/Girl-with-Tessier-Facial-Cleft-Undergoes-3D-Printing-Surgery-to-Reconstruct-Face-150x150.jpg2017-08-29T05:13:14+00:00Non-Stop HealthyBeautyHealthRecipes3d,face,operation,surgery,tessier
The saying “When the going feels impossible, the impossible is challenged with innovation” is the motto of Dr. Meara and his colleagues. Dr. Meara and his team came up with an innovative idea to use 3D-printing in the medical world so that they help the little Violet Pietrok. Violet is one...
Dragana Andreevskanonstophealthy@gmail.comAdministratorNon-Stop Healthy
Share
tags: 3dfaceoperationsurgerytessier

How to Look Beautiful in the Morning Without Using Any Makeup

« Do You Have a Lump on Your Neck, Back, or Behind Your Ear? This Is What It Means!
“The Point Of A Hundred Diseases”- Here Is What Will Happen If You Massage THIS Spot Every Day! »